By SearchIndia.com on September 7, 2007Comments Off on Sony Joins DSLR Battle with New 12.2 MP Camera

Sony is attacking its rivals Canon, Nikon and Panasonic in the digital SLR market with a new offering – the DSLR-A700 – targeted at photo enthusiasts and serious photo hobbyists. 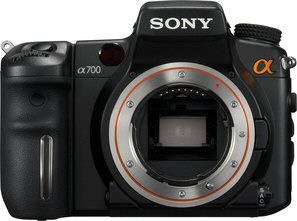 Like the older A100 model, the new A700 also features image stabilization in the camera body itself and compatibility with most Minolta Maxxum mount lenses besides the Sony lenses.

For the A700, Sony has developed a new BIONZ processing engine that’s optimized to process picture information at high speeds and reduce picture noise in the RAW data stage before final image compression and encoding.

Highlights of the Sony A700 include: