By SearchIndia.com on December 31, 2015Comments Off on The Hateful Eight Review – Starts Slow, Ends Very Strong

To my great dismay, The Hateful Eight did not have the fiery opening I ecstasied to in Quentin Tarantino’s last two films, Inglourious Basterds and Django Unchained.

I confess the relatively slow paced start of The Hateful Eight had me irritated and occasionally even nodding off for a few seconds now and then in the first 30 or 40-minutes.

But once the hateful eight came together under the same roof, I was so rapturously captive to the unfolding magic that I probably never blinked for fear these ‘ol Brown eyes might miss a crucial dramatic moment.

A grand treat for the non-Dilwale crowd, The Hateful Eight is written and directed by one of Hollywood’s creative Leviathans, Quentin Tarantino. 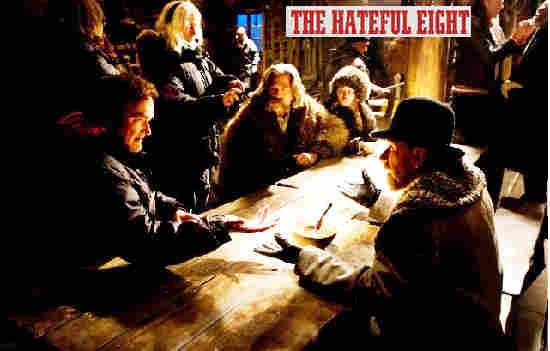 The movie begins with a panoramic sweep of a horse carriage trudging through a thick blizzard in Wyoming to the accompaniment of Ennio Morricone’s haunting score.

These are the years following the U.S. Civil War, an era when Abe Lincoln was still a fresh memory in the minds of people (a point the movie underscores by way of the late President’s letter to a key member of the film’s dramatis personae).

John is braving the blizzard so he can collect the $10,000 bounty award issued for Daisy ‘Dead or Alive.’ Being a hangman himself, he wishes to see the Gorgon hanged for her crimes.

Suddenly the carriage grinds to a halt in the vast snowy expanse. There stands another bounty hunter, Major Marquis Warren (Samuel Jackson) with three corpses. The Major’s tired horses have given up the ghost leaving the Black man stranded in the freezing storm.

A short while later, the carriage stops again for another stranded man in the icy wasteland. This time, it’s a young White fella who claims he’s the new sheriff of Red Rock.

When the blizzard forces this loathsome bunch to break journey at Minnie’s Haberdashery (a roadside inn), they join four execrable ones already at the inn.

With an embarras de richesses of hateful characters at the inn, the dramatic intensity slowly boils into an inferno with the hallmark Tarantino ending.

With its powerful dramatic impact coming not from a single hero or super-hero but from an ensemble effect of the whole being greater than the sum of its individual parts and powerful writing, The Hateful Eight is a director’s film.

Although the movie starts off picturesquely in a winter blizzard, much of the movie is actually filmed indoor in a large room at Minnie’s Haberdashery.

It requires creative geniuses like Roman Polanski (The Carnage, 2011), Sidney Lumet (12 Angry Men, 1957) or Quentin Tarantino to wring grand drama out of the geographically constrained setting of a small room.

And Quentin Tarantino pulls it off majestically with eight hateful characters whose hard edge of violence is always on the surface, ever ready to explode in a furious burst of gun fire.

The movie starts off in conventional narrative form with the action moving forward but suddenly pauses for a brief flashback. Quentin deploys the flashback tactic twice or thrice, each time to stunning effect.

Not once do we see the twists, small and big, that ambush us.

My all time favorite composer Ennio Moricone does the honors for The Hateful Eight.

While diehard Morricone fans will agree that his work in this film does not scale the heights of the maestro’s finest pieces (think Sergio Leone’s spaghetti Westerns The Good, the Bad and the Ugly, For a Few Dollars More, A Fistful of Dollars and Once Upon a Time in the West), they’re still crack cocaine for his legions of admirers. (Just before they lay me in the ground or push me into the fiery furnace, I want Morricone’s cinema scores playing in the background.)

Be warned though that the accent and language is sometimes hard to follow in the film. But just keep your eyes peeled open and soak in the violent smorgasbord.

The Hateful Eight is strongly recommended for all those who agree with me that Dilwale and Singham represent the cinematic dregs.