By SearchIndia.com on October 5, 2010Comments Off on Yipee, Pak Terrorist Faisal Shahzad Jailed for Life

What a great day.

Really nice day outside. Just look out the window.

Folks, Faisal Shahzad, the Pakistani-American Islamic terrorist who made an abortive attempt to bomb New York City’s Times Square in May, was sentenced to life in prison by an American court a short while ago. 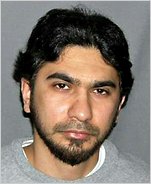 Following the sentence, the 31-year-old Faisal told the Manhattan court:

Brace yourselves, because the war with Muslims has just begun. The defeat of the U.S. is imminent and will happen in the near future.

Faisal filled a car with explosives and tried to detonate it in the busy, tourist-filled Times Square area. Fortunately, he did not succeed and the scumbag was arrested two later on an aircraft at JFK airport, just as he was about to flee the U.S.

We strongly suggest all Pakistani Americans be kept under heightened observation lest anyone else be tempted to follow in Faisal’s footsteps.