By SearchIndia.com on November 11, 2010Comments Off on Galaxy Tab Wins Decent Reviews from WSJ, NYT

Apple’s iPad, which has had the Tablet field for itself since it debuted six months back, is getting its first real competition with the launch Samsung’s Galaxy Tab.

In what must surely be welcome news to Samsung’s designers, both the Wall Street Journal and the New York Times have given the Galaxy Tab favorable reviews overall. 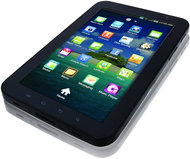 I’ve been testing the Tab for a couple of weeks and I like it. It’s a serious alternative to the iPad and one that will be preferred by some folks….The Tab is attractive, versatile and competitively priced, though monthly cell fees can add up. It’s different enough from the iPad, yet good enough, to give consumers a real choice.

But Mossberg, a fan of all things Apple, qualified his review and made it clear he still prefers the iPad for its larger screen size, more iPad applications (40,000), better battery life and higher storage capacity.

The New York Times‘ David Pogue also had nice things to say about the Galaxy Tab:

Samsung sweated the details on this thing. The screen is gorgeous. The touch response is immediate and reliable. The whole thing is superfast and a pleasure to use.

But Pogue also listed a few ‘frustrations’ like not being able to charge the device of a computer’s USB port, the $600 price, most applications being designed for the Android phone and forcing visitors to view mobile versions of popular sites such as NYT, CNBC and Amazon.

By the way, we are not backing away from our stand that at current prices and given the depressed economic climate the Tablet market ain’t taking off no matter the hype.