A Notorious Muslim on Hindustan

By SearchIndia.com on May 28, 2014Comments Off on A Notorious Muslim on Hindustan 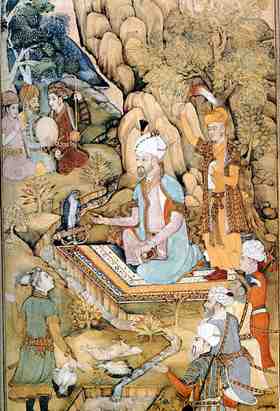 You either love it.

Or you loath it.

Even among those who conquered and quickly emptied its coffers, there was little love for India.

The early Mughals who laid the foundation of a pan-India empire in the 16th century and the British who replaced them two centuries later had little love for India.

For the outsiders, India has always been a God-sent opportunity for rapine and plunder.

Here’s what Babur, who laid the groundwork for the Mughal empire in India, had to say on Hindustan (land of Hindus):

Hindustan is a place of little charm. There is no beauty in its people…the arts and crafts have no harmony or symmetry…There is no ice…There are no baths. – Babur
Source: The Baburnama, review article by Salman Rushdie in Step Across This Line, p.178

So, what was Hindustan good then for Babur?

The one nice aspect of Hindustan is that it is a large country with lots of gold and money.

Ditto with the British.

Beneath the altruistic drivel about the White Man’s burden and the great mission of civilizing the natives, India to the British was nothing but a fount of extraordinary wealth and unimaginable riches.

India provided the seed money for the Industrial Revolution that worsened our country’s plight.

Early British heroes like Robert Clive and Warren Hastings and hundreds of other pale-skinned men returned home extremely wealthy after their Indian plunders.

In the 20th and 21st centuries, giant corporations have replaced individual marauders (like Babur heading a ragtag army) or maritime adventurous countries (like Britain) as the giant excavators of India’s remaining wealth and resources. For instance, the growth of Pepsi and Coca-Cola in India has been accompanied by depletion of groundwater resources.

Why blame the invaders alone for India’s plight! After all, it’s in the Indian DNA to lie prostrate at the mere echo of an invader’s footsteps!

In both men, a cold appreciation of the necessities of power, of what would today be called realpolitik, is combined with a deeply cultured and literary nature, not to mention the love, often to excess, of wine and women.(p.178)