By SearchIndia.com on October 6, 2014Comments Off on The Son Review – Hindus Don’t Wear Turbans

[T]he age of mercy is over and …the day of Judgement has arrived. But as the Messiah is running late, we have to do his job for him. 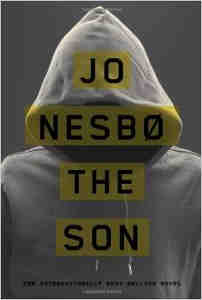 I hate it when Western writers don’t know the basics about India or its majority Hindu inhabitants.

A short while ago, I completed Norwegian writer Jo Nesbo’s latest crime thriller The Son.

And you know what? The stupid fuck Nesbo thinks just because a person wears a turban (or a head bandage resembling a turban), it makes him a Hindu.

Ditto with Whites in the U.S. – Ignoramuses who are clueless about the difference between Hindu and Hindi. No kidding.

To make it worse, the stupid White trash wear ignorance as a badge of honor when it should be a shameful scarlet letter on the forehead or a painful millstone round the neck. A few years back, a White trash savage killed an innocent Sikh because he was wearing a turban. In the White trash worldview, since Osama bin Laden also wore a turban, ergo the Sikh must be Osama’s sibling, buddy or compatriot.

Ignorance is an inexpiable offense where it can be easily fixed.

If there’s any certainty in an uncertain world, it’s that violence works.

All that mumbo-jumbo about Gandhi, pacifism, non-violence, Ahimsa, Buddha, Mahaveer et al are just for the unwashed masses and have no relevance to the real state of human affairs.

One of Nesbo’s great strengths is in how he weaves violence deftly into the plot of The Son.

Not too little. Not too much. But just enough blood curdling violence to keep your adrenaline high enough for the course of the 401-page book.

People die in horrific ways. But deservedly so.

In a broad sense, The Son is a revenge drama although it takes 40 pages for the vendetta to get started.

When melded with corruption, drugs, greed, crime and violence, revenge dramas are intoxicating. You can’t get enough of them.

Sonny Lofthus (30), the Gandhian hardcore heroin junkie, dispenser of blessings and confessed murderer of multiple people, has been lodged at Oslo’s Staten maximum security prison for the last dozen years.

With long matted hair, a long beard, quiet demeanor, constant high and a body disfigured by needle marks, Sonny is one strange creature at the Staten prison.

One day, a dying cancer inmate Johannes Halden tells the junkie the truth about the circumstances of his cop father Ab Lofthus’ death 12 years earlier. A tragic event that sent the lives of Sonny and his mother spiralling out of control and eventually pushed them both over the rails.

Lodged in the high-security prison run by the martinet Arild Franck what can Sonny do with his new knowledge?

Halden’s revelation turns Sonny life upside down and shifts the book from first gear into third gear where it stays till the end.

Nesbo paints a bewitching portrait of Sonny – the wrestling younger days, the decade-long prison years spent in a heroin haze, the ceaseless violence, the righteous anger and a soul that retains its purity till the end.

In a novel teeming with colorful and violent characters, Sonny rises above all of them in violence and purity.

But Sonny is merely one among many characters brought to life beautifully by Nesbo’s pen. There’s the homicide squad chief Simon Kefas, the de facto prison boss Arild Franck, the ruthless gangster Nestor, the hostel chief Martha, the many criminal underlings and above all, the Twin.

Each of these characters and their actions turn this book into a powerful drama.

A crime thriller on steroids like The Son doesn’t come by often.

Of course, there are holes a plenty in The Son. I won’t dwell on them since you’ll figure them out quickly enough.

SearchIndia.com is thrilled to recommend The Son to every crime novel buff.

The Son is available at every U.S. library. Reserve your copy of this unputdownable thriller today.