By SearchIndia.com on July 23, 2015Comments Off on Leviathan Review – Russian Gem

Soon after I watched Leviathan (2014), I stumbled upon an interesting tidbit about this Russian film.

It seems Leviathan snapped up the Golden Peacock award at the 45th International Film Festival of India.

Who’d have thought that!

As always, an Indian connection to all things good and bad. 🙂

If there’s one thing the petty dictator Indira Gandhi was right about, it was her banal response “corruption is universal” to a question about widespread corruption in India.

There’s no land of milk and honey on this planet. No Utopia when humans enter the picture. 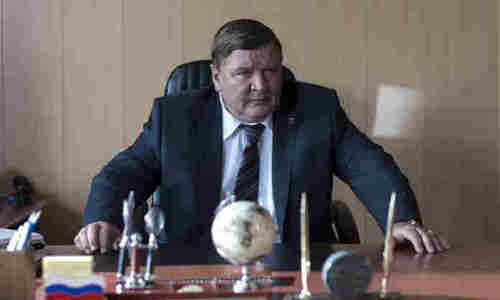 In countries like India and Russia, corruption and crime are rife at the bottom rungs of officialdom and not infrequent in the higher echelons.

Au contraire, in the US corruption at lower levels of bureaucracy is almost non-existent but gigantic at higher levels (lobbying and huge speaking fees are merely euphemisms for corruption).

Leviathan stands at the intersection of crime, corruption, abuse of power, injustice and adultery in a stark Siberian coastal town.

Devoid of much vegetation, the icy town with high cliffs and the hulking skeleton of a huge whale broadcasts isolation and a sense of desolation.

When the powerful local mayor Vadim sets his eyes on Kolya’s home situated in a picturesque corner of the town overlooking the water, neither the law nor Kolya’s steadfast refusal to sell it will deter the crooked politician from making a grab for it.

The film opens when Kolya already has his back to the wall over the town’s move to take his house on specious grounds.

On the home front, Kolya has to deal with constant friction between his wife Lilya and Roma (Kolya’s teenage son from his previous marriage).

His lawyer friend Dmitri’s arrival from Moscow is Kolya’s one last hope to salvage the house from the predatory appetite of the mayor and his thuggish cronies.

But Dmitri’s arrival comes as a mixed blessing to Kolya.

An early legal loss for Kolya appears to turn into a victory. Dmitri’s blackmail over some unsavory incidents in mayor Vadim’s past pushes the politician into a corner.

But then disaster strikes Kolya with a ferocity from which he reels. The thuggish mayor Vadim is not backing off and quickly has both Kolya and Dmitri over a barrel.

That’s not all Kolya has to contend with.

A routine picnic with his wife Lilya, Dmitri and other friends opens his eyes to a terrible betrayal that compounds Kolya’s troubles and soon sets him on the path of no return.

The photography is as evocative as the highly realistic story where the fate of the powerless ‘little man’ Kolya is inextricably tied to the whims of powerful and thuggish elements around him.

Even the Russian church is portrayed as being in bed with the criminal elements. That’s hardly surprising since official religion everywhere has always cast in its lot with the powerful and wealthy.

The beauty of Leviathan lies in its engaging narrative, realistic subject, remarkable acting and superb photography.

Roman Madyanov as mayor Vadim and Aleksei Serebryakov as Kolya are powerhouses of talent and we’d love to see more of them on the screen.

In Leviathan, director Andrey Zvyagintsev has delivered an extraordinary film that deserves all the accolades heaped upon it.

The film won the Best Screenplay award at the 2014 Cannes Film Festival but missed out on the Palme d’Or. Leviathan also picked up the Best Foreign Language Film award at the 72nd Golden Globe ceremony in addition to the nomination for Best Foreign Film at the 87th Academy Awards ceremony (it lost out to the Polish film Ida.

For those keen on watching Leviathan, this beautiful film is available on DVD at Netflix.