The Undertaker’s Daughter – Fails to Live Up To its Potential

By SearchIndia.com on July 29, 2015Comments Off on The Undertaker’s Daughter – Fails to Live Up To its Potential 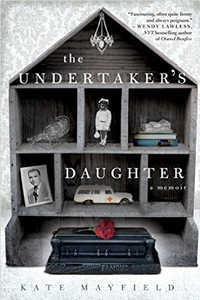 by Kate Mayfield
2015, 348 pages
Good books are hard to come by these days in my local library.

So I was all atwitter when I spotted a beguiling title like Kate Mayfield’s memoir The Undertaker’s Daughter.

Little did I know the bitter disappointment that lay ahead of me!

Given its title and unusual subject matter, The Undertaker’s Daughter promised great potential.

Author Kate Mayfield has a huge advantage over the rest of us ordinary hacks.

You see, her father Frank Mayfield, a World War II veteran, ran a funeral home in Jubilee (a small town in Kentucky).

And Frank and his family (wife Lily and children Thomas, Evelyn, Kate (author) and Jemma) lived right above the funeral home.

Now how many of our Indian parents run funeral homes?

Damn, most of us long-time Indians in Amreeka are offspring of boring bank clerks, teachers, low-level government bureaucrats, engineers, doctors or welders.

When I left Mera Bharat Mahaan many summers ago, there was no concept of a funeral homes in India.

In Indian homes, there’s typically a lot of wailing and shrieking around the dead body before it’s taken out for cremation (India’s majority Hindus practice cremation).

Americans are outwardly more composed in the face of death. An average American displays more emotion over a scratch on his iPhone 6 Plus than the loss of a parent or a sibling! 😉

Wow, how many people live right above a funeral home.

Whenever a phone call arrives informing Frank about a death, Kate and her siblings are forced to stop their antics and turn quiet.

After all, a dead body is the family’s bread and butter.

These are the 1960s and early 1970s in the American South. An unsettling period in the country.

The era of Vietnam draft that sent countless young American men to an early grave in a remote Asian jungle and rampant racism in Southern towns like Jubilee.

But young Kate’s White pussy for some bizarre reason aches for a Black cock.

Why do White pussies often ache for Black Cocks? Do Blacks really have long schlongs?

There she goes, sniffing after Black boys like Noah and Julian (??) in heat!

Ultimately, to a Black cock does Kate spread her legs for the first time in the silent woods near Jubilee!

But my main problem with The Undertaker’s Daughter has to do with the writing.

When talking about her childhood, Kate often writes above, far above, the age of a child!

Besides sounding phony, that is mighty irritating.

Memoirs, in theory, promise a full litany of good, bad and ugly but this one leaves us feeling mighty shortchanged!

The author is all over the place, offering us vignettes before vamoosing off in a different direction.

Except for Frank, we don’t get a good picture of any of the other characters including the author.

What happened to the family after Frank’s premature death?

How did the family manage given their limited resources?

Did Kate do well at the theatre school in New York? Was she ever in a Broadway play?

Was Kate’s pussy still hungering for Black Cocks in Manhattan? Did she fall in love?

Why, and when, did she move to London?

We have no clue! Worse, the book ends just 21 pages after Frank’s death of Pancreatic Cancer in 1977 at 52!

What the hell! Nearly four decades covered in just 21 pages!

Also, I have a feeling there’s more to the issue of Frank inheriting Miss Agnes’ house than Kate would lead us to believe!

For sure, we’re missing a lot of stuff.

The writing, for the most part, is merely above average.

Surely, life above a funeral home in the 1960s and 1970s in a small town in Kentucky must have been more interesting than what Kate offers us.

Its alluring title not withstanding, I’d not recommend The Undertaker’s Daughter to my beloved readers.

Schade, the book miserably fails to live up to its potential.