By SearchIndia.com on August 4, 2015Comments Off on The Shadow of the Crescent Moon – Thank You, Bitch! 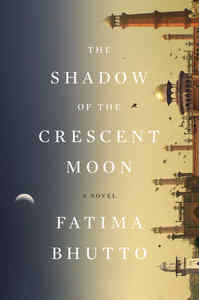 For this fine debut novel by Fatima Bhutto, I owe much thanks to a bitch.

I never had the good fortune to set my eyes on the bitch, only heard of her antics second-hand.

But the bitch did me a huge favor for which I’m indebted to her.

You see, back in Mera Bharat Mahaan many summers ago a friend mentioned that his father had named the family dog Bhutto (after the late Pakistani president Z.A.Bhutto) driving our group into howls of laughter.

After all, there are only three things that unite Indians – Cricket, our crappy Bollywod movies and deep hatred for the Paki curs.

So when I spotted Fatima Bhutto’s novel The Shadow of the Crescent Moon on the new books shelf of my local library, in a nostalgic reverie I picked it up because the author’s last name reminded me of my friend’s kutiya.

Did I hear someone mumble life is stranger than fiction?

I say, Thank You, Bitch!

While we Indians have a lot to feel miserable about our nation, our heart gladdens at the mere thought of Pakistan.

In every respect, Pakistan is a shithole a million times worse than India.

Pakistan has been tottering on the verge of collapse since its inauspicious birth in 1947 thanks to the British policy of divide et impera, opportunism of Jinnah and desperation of the Congress leadership to assume power.

Occasionally, we Indians even feel proud of Mera Bharat Mahaan but it’s hard to believe a single Pakistani exists anywhere on this planet who has pride in his woebegone land.

India is democratic and secular (with some lapses) and has established a large industrial base, a huge software business, a growing pharmaceutical sector, a thriving movie industry, a vibrant startup culture and an enterprising private sector.

Above all, millions of Indians today have a sense of hope in the future. The warm feeling that the morrow might usher in a better dawn.

No sane Paki yearns or hopes for a better tomorrow, only fervently prays that the fresh dawn should not be worse than the nightmare of the previous night.

Bad as things in Pakistan generally are, the situation is infinitely worse in the Northwest tribal areas (bordering Afghanistan) that are directly administered by the Pakistani government.

A long-lasting rebellion against the central government, backwardness of the region, torture camps of the occupying Pakistani army, violence of the Taliban, drone attacks by Americans and abject poverty have combined to embitter the local populace who view all Pakistanis outside their region as enemies.

Fatima Bhutto’s novel is set in these dangerous parts, in Mir Ali, a small town in North Waziristan (in the Northwest tribal region bordering Afghanistan).

Like all engaging tales, Shadow of the Crescent Moon encompasses many elements – Love, betrayal, anger, ambition, violence and vengeance, all wrapped in a macro political and military framework.

At the micro level, the focus of Fatima’s novel is on three brothers – Aman Erum, Sikandar and Hayat.

I’m a great fan of fiction that sets key characters against a panoramic backdrop of the region and its history. Fatima easily scores a century in this respect

Where there are men, there must be at least a few women. To love, hurt and to occasionally betray. Here, there are two key women, Samarra Afridi and Mina (Sikandar’s wife).

Indifferent to past and present injuries to his homeland and its people, Aman Erum is the most ambitious of the three brothers with his eyes set on the West and dreams of making heaps of money in exciting business ventures.

All Aman wants is to get out of the place, a place he never belonged to even while he was there. To leave Mir Ali and get on the road to riches in America, Aman makes a Faustian pact with the Devil his father and all locals loath most.

Like all Faustian pacts, this one too is a harbinger of doom.

Over time, Aman’s behavior estranges his father Inayat from the oldest son.

Sikandar, the middle son, drops his business goals and becomes a doctor at the local government hospital. He has a happy marriage until a terrible tragedy strikes and sends his wife over the bend.

Meanwhile, the youngest son Hayat has grown to be his father’s favorite. Nourished on a steady diet of “past wrongs, past injustices, past errors” to his land and people from the Pakistani outsiders, Hayat had turned a prisoner to the past.

Setting the novel over a three-hour period from 9AM to 12PM on the holy day of Eid, Fatima weaves a beautiful portrait of the region, the culture, the people, its history, the failed rebellions, the deep simmering rage against the Pakistani outsiders and the ruthless actions of the military.

Repeatedly crushed as the local people are by the large Pakistan army, rebellion is still never far from their lips, and deadly schemes continue to be plotted.

The three brothers are caught in the maelstrom of dark forces around them – the Pakistani army, Taliban, incessant violence, poverty, torture camps and the deep thirst for vengeance from both sides.

After all, how can the brothers escape the fate of the region when they’re rooted in it!

Some readers may feel uneasy about the vague ending but I was not.

I only saw a terrible betrayal that portends a death sentence for one of the key characters.

Of all the human sins, I find betrayal hardest to comprehend. The offenders are vulgarly loud with their justifications drowning out the effete cries of their victims.

Also, I’ve never understood this obsession with clarity in art (books, movies, music or paintings) when there’s so little clarity in life itself.

Fatima’s book is a fine work reminding us that there’s no place on Earth without a miserable tale unique to the region and its people.