By SearchIndia.com on August 18, 2015Comments Off on The Night Porter – Sadomasochist Gem

A few Good, mostly Bad and some Rotten.

Hey, no one can fault our local library for not stocking an eclectic collection of movies.

But hidden among the vast miasma of junk littering the DVD shelves lurk some real gems, both foreign and Hollywood.

The other day as my fingers traipsed over the DVD cases they stopped impulsively on The Night Porter. 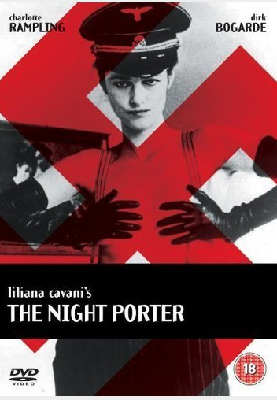 Because the DVD case looked new I thought I’d lucked out on a new movie.

As it turned out, it was only a new copy of a four decade old film featuring British actors Dirk Bogarde and Charlotte Rampling.

Italian filmmaker Liliana Cavani’s claim to fame rests on The Night Porter (1974), a film with a strong sadomasochistic undertone.

The film is set in Vienna of 1957 where nostalgia for the defeated German Reich is still strong among a small group of Nazis who meet surreptitiously.

These Nazi villains have escaped punishment for their monstrous crimes and now work in restaurants, hotels and other places around Vienna.

One of his ‘specialities’ as a guard was to practice medicine, of which he had absolutely no knowledge or training, upon prisoners.

After the war ended, Max too managed to evade capture and in his new ‘church-mouse’ avatar has found work as a night porter in an upscale Vienna hotel.

As anyone who’s lived a long life knows, life is not without unusual coincidences.

One evening, Lucia, one of Max’ pet prison victims from his Nazi past, checks into the hotel with her famous conductor husband.

Lucia and Max quickly recognize each other, and to our great surprise resume their sadomasochistic relationship.

Why? Sweetie, who can fathom the hidden depths of the human psyche! If you ask me, some things are beyond explanation.

We see a violent passion building from a strange albeit deep love between Max and Lucia.

While most of us feign moral revulsion at unconventional relationships like sadomasochism, truth be said most human relationships are inherently sadistic to some degree.

Equality is rare in societies or among families. If Inequality is the norm, then most power relations are inherently sadistic with victims often mutely submitting in masochistic fashion.

While Max and Lucia fall upon each other in a tempestuous fury and cut each other literally, Vienna’s other former Nazis will not stay silent, cannot rest easy.

For as long as the former prisoner Lucia is around them, their ‘new’ hidden lives are in peril.

So it’s impossible for The Night Porter to have a happy ending.

Director Liliana Cavani has put out an exceptional film of a strange passion set in a larger social context where violence from the past quickly spills over into the present.

Dirk Bogarde’s performance as Max is nothing short of masterful, perhaps his career best.

When finally the bells toll for Max and Lucia on the bridge, we feel a deep sadness for this unusual couple.

The Night Porter is a gem but not for the squeamish.

Extra: Dirk Bogarde served in the pre-Independence Indian Army as a Captain