So You Think Only Indians are Weird Bastards 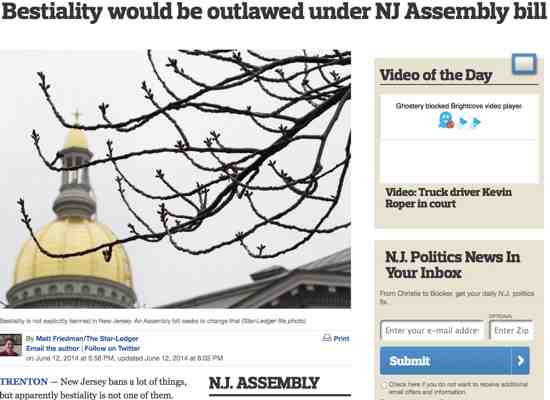 To all those who think only Indians are a bunch of weird bastards for screwing buffaloes, I have news for you.

But there are other weird bastards in the world who are equally notorious!

People in my neighboring state New Jersey so love buggering their pet goats, cows, bulls, chicken, cats and dogs that the state of New Jersey is now drawing up legislation to outlaw screwing animals!

On Thursday, New Jersey legislators voted in the Judiciary Committee 6-0 to ban sex between New Jersey residents and animals.

It seems New Jersey residents have even been “molesting” cows among other animals.

If the bill becomes law (an unlikely event given the  ‘insatiable love’ New Jersey residents have for their animals), then bestiality would become a fourth degree offense, according to the New Jersey paper Star Ledger.

Should the cow, chicken, goat or lamb die as a result of the NJ resident’s sexual assault, then the crime will be enhanced to a 3rd degree crime.

Moral of the story – Make sure you treat your animal lover kindly! 😉

Related Content:
Bestiality to be Banned Under NJ Assembly Bill

One Response to "So You Think Only Indians are Weird Bastards"