Why are Indians Going to Town on Rape? 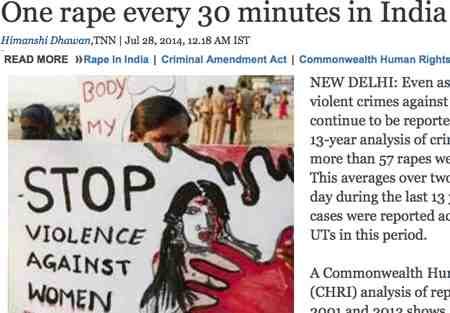 If you ask me, Indians (media, people and politicians) are going overboard on rape.

Now I’m not one to suggest we bestow honors on criminals who attack women or hang marigold garlands around rapists’ necks.

Every human – male, female and the transgendered – needs to be protected from society’s beasts.

But there’s an urgent need for some perspective because the daily media and public drumbeat on rape is drowning out focus on more pressing issues in India.

And that to me is a bigger tragedy than the tragic rape of Nirbhaya in New Delhi, of the two young girls in Badaun (Uttar Pradesh) or of the child in Bengaluru recently.

Also, given that in nearly 95% of Indian rape cases the victim and the offender were known to each other we must exercise skepticism over at least some of the rape claims.

Rape Rate – India vs US

If you read the headlines and comments in Indian newspapers, you’d think our people get up in the morning wondering whom to rape that day.

Now here’s the surprise for all you ignoramuses.

When adjusted for population, rape  is far lower in India compared to U.S., UK, Germany, Sweden, South Africa or Mexico.

To me, it suggests Indians are doing a better job in keeping their peckers in their pants and stopping when the girl says No.

It’s possible that rape statistics in India may actually be higher because of under-reporting due to the social stigma attached to rape victims. But that argument is valid to some degree for the U.S. and other countries too.

Let’s assume that under-reporting is high in India and double the rape rate.

Even if you double the rape rate in India to 4 per 100,000 India is still a far safer land for women compared to so many other nations.

Rape hogs so much attention in today’s India that it’s impossible to open a newspaper without encountering multiple incidents of rape, molestation and the like across the breadth of the land.

Citizens post vitriolic comments in newspapers, women are furious and take to the streets to protest, the talking heads on TV get apoplectic and politicians launch into interminable speeches decrying the attack on Bharatiya Naaris.

In short, all of India is going to town every time there’s a ‘prominent’ rape.

Rape has become so powerful an issue in India that in India’s Silicon Valley Bengaluru the Police Commissioner and Additional Commissioner of Police were recently shunted out after a couple of rapes in the city.

Across India, police inspectors and constables are quickly transferred after a rape is reported in a city, town or locality.

And everyday in a big Indian city, some women’s group is staging a protest, some MLA is holding a dharna and a few dozen school children are holding placards against rape.

And the Indian media covers all of the rape stories with reckless glee.

But rape is only one of many pressing issues in India crying for attention.

And it’s not even the most urgent issue demanding such a strong media and public response.

Although these problems impact the very survival of people, they get scant attention from the media, people and politicians.

But why do these pressing problems get so little attention in the media and among people compared to rape?

My hypothesis is that rape dominates Indian public discussion for two primary reasons:

* Because callous Indian men and women get titillated by reading about rape and not about hunger, starvation deaths or homelessness. Since Indian newspapers and TV channels give people the titillation they abjectly crave, rape has hijacked public discourse.

* Middle class women in India have developed strong clout in society lately thanks to higher education and their employment as well-paid professionals in IT firms, banks, biotech and pharma companies etc. And these women and their families are driving the relentless attention on rape.

Tell me what you think of the ceaseless media and public focus on rape compared to other pressing subjects.

Important: You can pick up to two answers in the below poll

2 Responses to "Why are Indians Going to Town on Rape?"