Forgery, favoritism and corruption have enabled Telugus and Tamils (the South Indians referred to in the book) to dominate and ruin the U.S. IT jobs market, according to a new e-book published on Amazon. 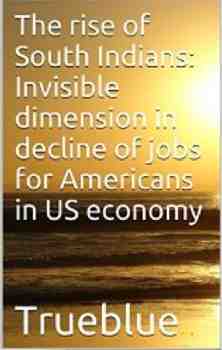 If the broken U.S. IT job market has to be fixed, the monopoly of Telugus and Tamils over these jobs must be ended, argues the author (supposedly an Indian) writing under the nom de guerre Trueblue

The title of the e-book is: The Rise of South Indians: Invisible Dimension in Decline of Jobs for Americans in US Economy. It costs $3.80 on Amazon.

Although the book is riddled with vexing grammatical errors, it makes several valid points on the fraud pervading the H1B Visa program (which allows Indians to work as IT programmers and consultants in the U.S. for up to six years).

Indians in the U.S. are already familiar with H1B Visa fraud since they are the ones committing them.

But for the unaware, the book provides a quick overview of the growth of the IT outsourcing business in the U.S. and the ensuing H1B Visa fraud that has severely impacted prospects of American workers.

The various illegal practices cited in the book will come as a surprise to a lot of Americans who have been misled into believing there’s a serious shortage of skilled IT personnel in the country.

The e-book is written against the backdrop of the U.S. proposal to grant Employment Authorization Documents to H4 Visa holders (i.e. spouses of H1B Visa holders) to let them work anywhere in any job.

The author makes several good suggestions to fix abuse of H1B Visas such as not allowing H1B Visa holders to work at third party sites, charging a $5,000 fee to H4 Visa holders before providing them with employment authorization to work in the U.S and the need for vocational programs to train American workers.

South Indians in IT

It’s no secret that South Indians dominate the IT jobs market among H1B Visa holders in the U.S.

Among South Indians, it’s Telugus and Tamils who fill most of the IT jobs, be it at JP Morgan Chase, DuPont, Citigroup, Bank of America or hundreds of other organizations that rely on outsourced personnel to keep their IT systems going.

Since there are far more engineering colleges in South India compared to the north, it’s no surprise that many South Indians are filling IT positions at most places, both in India and in the U.S.

But fraud is not the monopoly of just South Indians. I’m aware of North Indians who too have committed various visa frauds.

Because there are not many North Indians holding IT jobs in the U.S., their fraud does not attract attention. So it does seem unfair to pick on South Indians.

A major issue with the book is the author’s ignorance of the basic rules of grammar.

A third grade American kid would be better acquainted with the rules of English grammar. Be it punctuation, tense or spelling, the author is all at sea.

How the author manages to communicate with colleagues or clients is a riddle, wrapped in a mystery, inside an enigma (thank you, Winston).

Despite his ignorance of the basic rules of English grammar, the author has the temerity to attack Tamils and Telugus for their poor English.

Another interesting point is none of the people from these states are proficient in English; they quickly attack ascent (sic) and grammatical skills of others but never look at their own backyard.

A writer who doesn’t know the difference between ‘accent’ and ‘ascent’ or ‘their’ and ‘there’ has no business condemning others for their poor English.

The second weakness of the e-book relates to factual and logical errors.

For instance, the book says the “administration is subsidizing education more and more with each passing year” and immediately goes on to add that a graduate is unable to pay off his debts. Both can’t be true at the same time. Several studies have found that the cost of U.S. university/college education has soared over the last three decades and most students now take out huge loans.

The book talks of “administration loaded of welfare benefits” for Americans. That nonsense is straight from a Republican talking point memo without any basis in facts.

No, the Mughals did not rule India for 800 years before the British colonial era. I suggest the author read his 10th standard history book again.

U.S. based Indians will learn nothing new from the book.

I’m not sure American IT workers can do much even if they know of the massive fraud in the H1B Visa program because the balance of power is heavily tilted in favor of U.S. corporations that rely on H1B Visas.

One glaring omission – The author fails to mention that the military-industrial complex is one sector where, for security reasons, Americans have a better chance of finding IT jobs compared to Indians. I know of U.S. programmers who got fired, retrained in new areas and now have stable jobs at military companies in Virginia.

I got this e-book for free under the Kindle Unlimited trial program and read it on my iPad.

If you have an Amazon.com account, you too can read the 43-page e-book for free on the Kindle, iPad or computer without forking out $3.80.