Many Faces of American Ganesh

By SearchIndia.com on September 2, 2008   General, Religion

Today i.e. August 29, 2014, Indians across the world celebrate Ganesh Chaturthi in honor of the birthday of Lord Ganesh (the son of Shiva and Parvati and a favorite God for millions of Hindus). Does anyone now how old Ganesh is? In several states of India, Ganesh Chaturthi is celebrated for several days and at […]

Gujarat Chief Minister and BJP leaderÂ Narendra Modi has received a notice from India’s Election Commission for his inflamatory campaign speech on December 4 in Mangrol thatÂ justified the killing of Sohrabuddin Sheikh in an Indian-styleÂ encounter with the police. The Sohrabuddin Sheikh encounter case is now before India’s Supreme Court. In a notice to Modi asking him […]

Vatican Hits Back at Hindu Activists on Diwali Eve

By SearchIndia.com on November 5, 2007   General, Religion

Stung by persistent criticism of Hindu activists that Christian missionaries in India are pressuring and inducing poor Hindus to convert to Christianity, the Vatican threw the gauntlet at Hindus on the eve of the Diwali festival. Cardinal Jean-Louis Tauran president of the Pontifical Council for Inter-religious Dialogue said on Monday: Belief and freedom always go […] 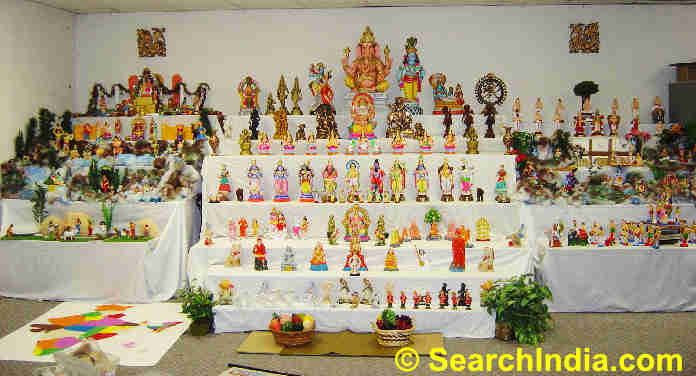 Dasara Festival is synonymous with arrangement of dolls in South India, particularly in Mysore (Karnataka), Tamil Nadu and Andhra Pradesh. During our travels in California a few years back, we found the below arrangement of dolls at a Hindu temple in San Diego. Dasara Dolls at Shiva-Vishnu Temple, San Diego (2005) According to the folks […]