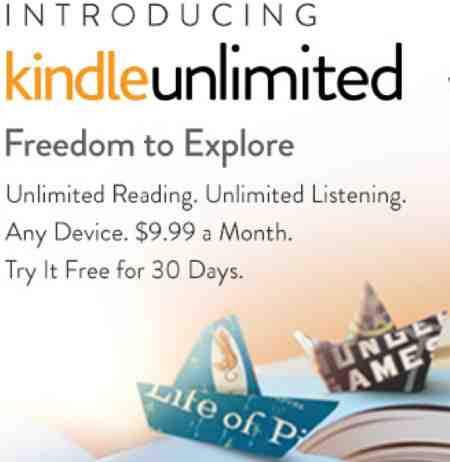 Unlike Apple or Netflix, Amazon has never had class.

If you ask me, Amazon is merely a more efficient version of Walmart and the Post Office combined.

What I mean is that Amazon lets you get cheap stuff delivered to your house or office fast.

Kindle e-reader and Kindle tablet are both cheap plastic junk targeted at those who lack the class and the ingenuity to beg, borrow or steal an iPad.

And Amazon Prime Instant Video is mostly old stuff for people who thrive on leftovers.

Given my knowledge of Amazon’s lowbrow offerings, I did not expect the just announced Kindle Unlimited e-book subscription service to be anything remarkable.

Still given my passion for reading, I took a deko at Kindle Unlimited.

Since reading is my refuge from the tedium and turbulence of daily life, I quickly signed up for the $9.99 per month Kindle Unlimited service.

Kindle Unlimited is kinda like an all-you-can Indian buffet in the U.S. (btw, only Chinese and Indian restaurants offer buffets in America).

Of course being a desi, I quickly took advantage of the free 30-day trial for Kindle Unlimited.

You can borrow  up to ten books at a time from the Kindle Unlimited catalog and read them on up to six devices or reading apps.

You have to sign up for the program. Since I already had an Amazon account it took just 10-seconds to sign up for Kindle Unlimited. And then to fire up the dormant Kindle app on my iMac and registered my account, it was another 10-seconds.

Most of the books I searched for were not available on Kindle Unlimited.

Finally, I settled on The Order of Things: Hierarchies, Structures, and Pecking Orders and a couple of other books.

Once I added a book via the browser on the Amazon web site, I could send it to both my Mac as well as the Kindle app on my old iPad 2. If the book doesn’t appear on your PC or tablet, hit refresh and you should see the e-book. It took less than a minute for them to appear on my computer and tablet. I did not test the service on my Kindle e-book reader but I have no doubt it’ll work on any device registered with Amazon.

But easy signup and fast delivery of e-books to the PC, tablet or other devices are only two aspects of Kindle Unlimited.

More important is the breadth of quality books available on the service.

Amazon is making a big deal about the 600,000 titles available on Kindle Unlimited.

But Kindle Unlimited’s glaring weakness is that a ton of good content is missing on the service.

Decades-old classics like Nabokov’s Lolita and Pnin are not available on Kindle Unlimited. It’s like Netflix not carrying movie classics like Casablanca, Star Wars, Citizen Kane or Forrest Gump.

I understand that major publishing houses like Penguin Random House, HarperCollins, Macmillan, Hachette and Simon and Schuster are not participating in Kindle Unlimited. That leaves thousands of popular books, old and new, out of Kindle Unlimited.

Amazon is now perceived by publishers as the 600-pound gorilla out to wreck their business.

So I’m not surprised the big publishers are not playing ball with Kindle Unlimited.

Indians are increasingly leaving their stamp on English books, both fiction and non-fiction.

Sadly, the list of prominent books by Indians or on India missing on Kindle Unlimited is a long one.

Here are a few Indian gems missing from Kindle Unlimited:

* Mahatma Gandhi – Autobiography: The Story of My Experiments with Truth

* Ramachandra Guha – India After Gandhi: The History of the World’s Largest Democracy (2008)

* Katherine Boo – Behind the Beautiful Forevers (2012)

Besides the popular Indian writers, I found plenty of other favorites too missing in Kindle Unlimited.

Gogol died in 1852 and it’s unpardonable that his works should not be part of Kindle Unlimited.

* Will and Ariel Durant – The Story of Civilization

I’m not in the least surprised that Kindle Unlimited is a huge disappointment.

I’ve never expected anything better from Amazon and they’ve never surprised me.

For bibliophiles, Kindle Unlimited is not the only e-book subscription service.

Unlike a movie rental/streaming service like Netflix or music service like Spotify, e-book subscription services have yet to take flight because of the limited selection and pricing.

If you ask me, there’s no better book subscription service than your local library.

U.S. libraries allow readers to borrow more than 10 books, magazines, music CDs, and movie DVDs at any time for free (of course, it’s funded by the taxes you pay). If you’re looking too borrow e-books from your local library, use the Overdrive app.

I can’t see Kindle Unlimited becoming a big hit unless they ramp up the number of classics and popular books from major authors.

In its current form, Kindle Unlimited is just not worth it.