Maybe Microsoft CEO Satya Nadella is not so dumb after all.

The Telugu bidda knows in his heart that Indians are a value conscious bunch who will not squander $1,500-$2,500 on buying a piece of tablet junk like Surface Pro 3 that pretends to be a laptop.

So Nadella did the right thing – Ignored the Indian market. 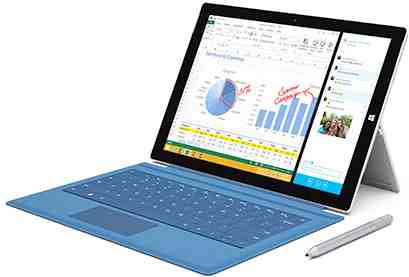 But India is missing from the list of the new markets.

While all three models (Intel Core i3, i5 and i7) of Surface Pro 3 are available in the 28 markets, the Surface Pro 3 Docking Station will debut only in mid-September.

To compound Microsoft’s problems in the tablet space, some customers of Surface Pro 3 have been complaining of overheating.

The problem has been found mostly in Surface Pro 3 tablets with i7 processors and occasionally with units running the i5 chip as well.

Previous bugs in the Surface Pro 3 include boot failures and WiFi connection issues.

Microsoft has found it impossible to get customers to pick up the Surface line of tablets.

Previous versions of Surface met with a pathetic reception resulting in repeated price cuts and ultimately a write-off of nearly a billion dollars.

I’d be extremely surprised if the pricey, buggy Surface Pro 3 does not meet the same miserable fate of its predecessors.