Chronicle of a Death (Sentence) Foretold

By SearchIndia.com on September 24, 20142 Comments

It isn’t right that everybody should know that they’re going to kill her son and she the only one who doesn’t.
– Luisa Santiaga as she goes (belatedly) to warn Santiago Nasar’s mother Placida of her son’s imminent death
Source – Chronicle of a Death Foretold by Nobel laureate Gabriel Garcia Marquez

In Gabriel Garcia Marquez’s fine novella Chronicle of a Death Foretold, so many people know of Santiago Nasar’s imminent killing.

After all, brandishing recently sharpened knives the Vicario brothers tell anyone who’ll listen that they plan to kill Santiago.

But no one in the town stops the Vicario brothers. And the rare ones who try fail or it’s too late.

Brutally hacked just outside his door by Pablo and Pedro Vicario, Santiago Nasar staggers to his death holding the intestines spewing out of his body. 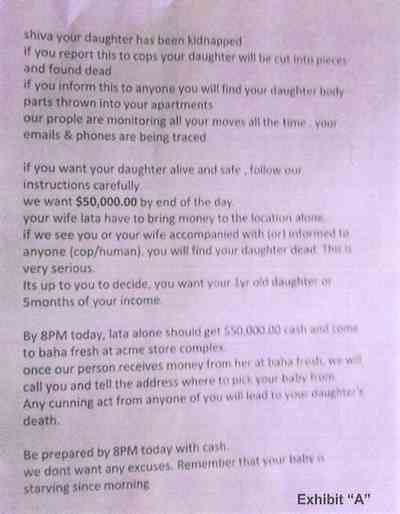 Telugu bidda Raghunandan Yandamuri (28) is the Santiago Nasar of our times.

Death has left its calling card on his cell door in the Montgomery County jail where he’s been lodged since his arrest on October 26, 2014 for allegedly kidnapping and murdering 10-month-old Saanvi Venna and killing the baby’s 61-year-old grandmother Satyavathi Venna in their King of Prussia apartment during a botched kidnapping for ransom attempt.

It’s inconceivable that the 12 jurors in Yandamuri’s trial starting tomorrow will award him anything but the death penalty.

The trial’s outcome is clear. Or Crystal, as Tom Cruise tells Jack Nicholson in A Few Good Men.

* Yandamuri doomed himself by confessing to the police on video to the two killings (which he claimed were accidental).

* His subsequent attempts to have the confession video suppressed as the result of police coercion failed when the judge rejected his motion.

* Yandamuri’s later attempt to pin the murders on two persons “Matt” and “Josh” were not in the least bit convincing.

* Judge Steven O’Neill has ruled that prosecutors may use Yandamuri’s gambling history and debt as a motive.

* Montgomery County (PA) prosecutors have mounted a strong case and are baying for Yandamuri’s blood, seeking the death penalty.

* Montgomery County authorities have spent a huge sum of money on the investigations, visits to India, lawyer fees (including payments to lawyers in India), the trial etc and at this time anything less than the death penalty for Yandamuri will be seen as an unacceptable outcome.

* Against Yandamuri’s objections, Judge Steven O’Neill has ruled that a picture of the crime scene (in grayscale) may be shown to the first couple of witnesses. The judge will decide on the other pictures later.

* After dismissing his state-appointed public defender attorney, Raghunandan Yandamuri is now his own lawyer. Yandamuri has no legal background and stands little chance against the seasoned prosecuting team of Montgomery County.

The trial is a mere spectacle, a grand drama for Indian-Americans across the country and locals in Pennsylvania.

The 28-year-old Indian software programmer has ZERO chance of escaping his dire fate.

Like Santiago Nasar in Chronicle of a Death Foretold, everyone knows Yandamuri is going to meet a sorry fate. Only, this time death will come later than sooner (given the appeals process).

2 Responses to "Chronicle of a Death (Sentence) Foretold"